On October 23, 1900, in the Olivia Raney Library near the State Capitol, a group of men and women convened the organizational meeting of State Literary and Historical Association. Just as Gov. Charles B. Aycock sought to redeem the state from a legacy of ignorance, the members of the association sought to raise the cultural sights of citizens. 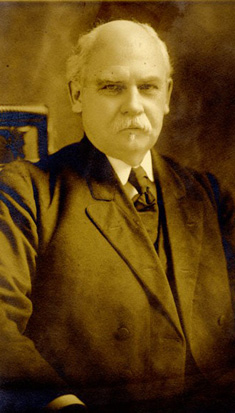 Early leaders made it their task to "correct printed misrepresentations about the state."

J. Bryan Grimes, who took office as Secretary of State along with Aycock the following year, persuaded the group to answer perceived slights. Members issued a detailed position statement on the Tar Heel claims, "First at Bethel, Farthest at Gettysburg and Chickamauga, and Last at Appomattox." A publication by that name appeared in 1907 under the auspices of the North Carolina Historical Commission (today the North Carolina Office of Archives and History). It was the commission's first imprint.

In January 1903 the association passed a resolution calling for the creation of the Historical Commission. Drafted by William J. Peele, the bill was enacted as law two months later. Since that time the histories of the association and the commission have been intertwined.

Key to Preserving Our State's Culture

"Lit and Hist" has played a key role in the cultural life of the state. The group has failed to meet only once, during the 1918 influenza epidemic. Its most conspicuous activity has been the annual meeting. Keynote speakers over the years have included former Presidents William Howard Taft and Harry S. Truman; writers Thomas Wolfe, Inglis Fletcher, and Charles Frazier; and scholars U. B. Phillips, Guion Johnson, and Blyden Jackson.

Offspring of the association have included many state cultural groups, among them the Folklore Society (formed in 1913), the Art Society (1923), and the Archaeological Society (1939). In order that all groups might coordinate annual convocations, "Lit and Hist" for many years sponsored "Culture Week."

A Goal in Many Ways Achieved

In 1967, Christopher Crittenden, the longtime director of Archives and History, addressed the role of the group in the state's cultural life. Crittenden observed:

Originally this was a kind of pump-priming operation, but now not only is the pump running at full capacity but a veritable flood is flowing forth.

On his recommendation Culture Week was scaled back and the group since that time has held its annual meeting, with afternoon and evening sessions, on a Friday in November.

The objectives of the association are to: