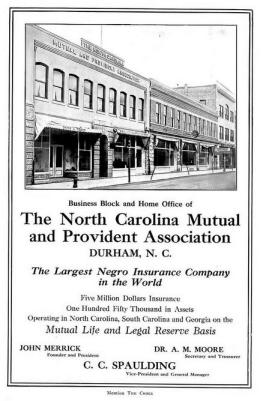 On October 20, 1898, John Merrick and six fellow investors met in the office of Dr. Aaron Moore to organize the North Carolina Mutual and Provident Association.

Among the group of African American leaders were educators James E. Shepard and Edward A. Johnson. The company was incorporated in February 1899 and opened for business two months later. Merrick, who served as president, is generally acknowledged as the founder. Dr. Moore, who succeeded him as president in 1919, is called the co-founder but Moore acknowledged in 1920 that it was Merrick who took the initiative in the organization. Along with C. C. Spaulding, Moore’s cousin, they formed the “Triumvirate” which led North Carolina Mutual Life Insurance Company (the name was changed in 1919) for over 50 years.

The company spawned allied businesses, among them Mechanics and Farmers Bank, a hosiery mill, real estate company, drugstore, and publications. The firm helped earn Durham its national reputation as “Black Wall Street” and the “Capital of the Black Middle Class.”  When famed African American leader W. E. B. Du Bois visited Durham in 1912, he observed an unparalleled level of black entrepreneurship, with North Carolina Mutual in the vanguard of the enterprise.