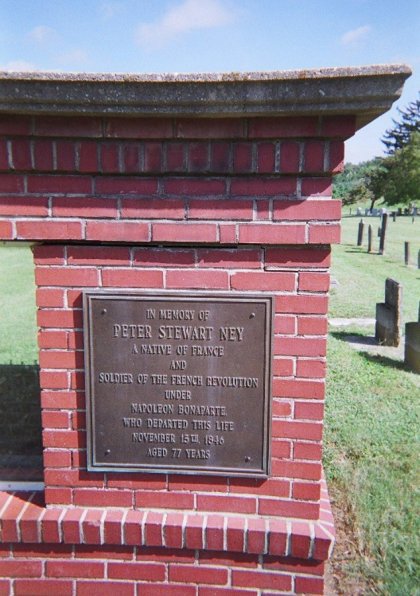 On November 15, 1846, Peter Stuart Ney, a teacher from Rowan County, is said to have made a deathbed confession that he was, in fact, Napoleon Bonaparte’s most trusted commander, Marshal Michel Ney. Marshal Ney was rumored to have escaped execution in 1815 and fled to America.

The story of Peter Stuart Ney first appeared in 1856 in a widely distributed article written by one of Ney’s students.  The teacher is said to have denied the rumors except when intoxicated but made a full confession on his deathbed, “I will not die with a lie on my lips, I am Marshal Ney of France.”  However, researcher William Henry Hoyt amassed conclusive evidence that the true Marshal Ney did not escape the firing squad.  He also found an 1820 application for citizenship filed by Peter Stuart Ney in South Carolina and a record of his baptism in Scotland.

Despite this counterevidence, the grave of Peter Stuart Ney at Third Creek Presbyterian Church in the town of Cleveland reads: “In memory of Peter Stuart Ney/ A native of France and soldier of the French Revolution under Napoleon Bonaparte/ Who departed this life November 15th, 1846/ Aged 77 years.”