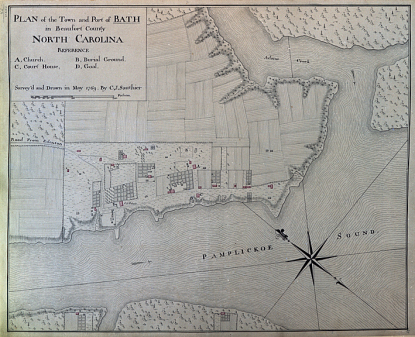 On March 8, 1705, Bath, the first town in colony of North Carolina, was incorporated. Bath was a thriving town of vital importance to the fledgling colony. The first town lots, recorded and acknowledged in court on October 1, 1706, were those belonging to Christopher Gale, the first Chief Justice of the colony. The following year Bath added a gristmill and the colony’s first shipyard. Other North Carolina firsts in Bath include the public library, St. Thomas Church, and the post road. 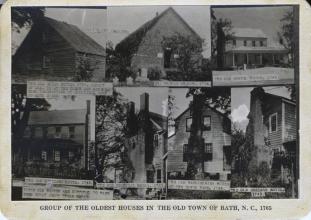 Bath became the colony’s first port in 1716,but was later overshadowed by ports which were geographically more suitable. The General Assembly met in Bath in 1743, 1744 and 1752. In 1746 the town was considered for capital of the colony. Bath was home to colonial governors Robert Daniel, Thomas Cary, Charles Eden, and Matthew Rowan. When the Beaufort County seat was moved to Washington, twelve miles away, Bath lost much of its trade and status, becoming the quiet, rural town that it is today.