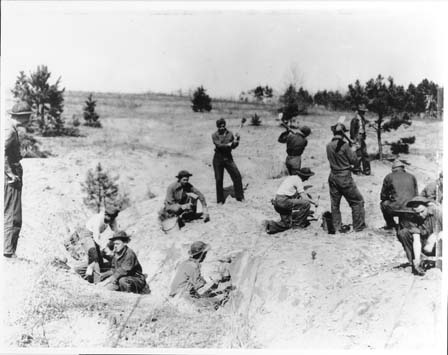 One of the earliest of North Carolina’s camps was Camp John Rock in Pisgah Forest. Plans were laid for the installation as early as April 1933 and men began arriving from Fort Bragg on May 5 to construct barracks and other buildings. Eventually, 220 workers were assigned to the unit. Their major projects included fish and fawn rearing, road building and maintenance, trail improvement, reforestation and forest conservation. Their work is evident today throughout Pisgah National Forest. The camp closed in 1936 and the program was abolished by Congress in 1942.

Directed by Army officers and foresters, the CCC was famous for its semi-military discipline. Dismissed by some as “Roosevelt’s tree army,” the CCC initiated site development and improvements in nearly 2,100 national, state and private forest and parks across the United States. By the end of its run, 3 million men were hired by the CCC at an average salary of $35 per month.