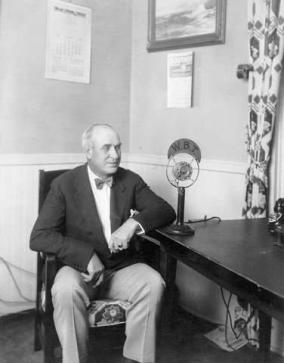 On April 10, 1922, WBT in Charlotte received a broadcast license, becoming the first commercial radio station in North Carolina. Advances in radio took place in three North Carolina cities in 1922. In Raleigh, on the campus of what is now N.C. State University, engineers installed a transmitter and initiated experimental broadcasts in March 1922. Regular transmission began on October 16, the day before the State Fair. Later that year the campus registered the call letters WLAC, but the following year the station left the air after campus funds were no longer available.

In Charlotte initial broadcasts began on March 25, in the kitchen of radio enthusiast Fred Laxton. Within weeks WBT had set up a studio in the Independence Building downtown. In Asheville, WFAJ, owned by the local newspaper, began broadcasts on May 4 but failed the following year. WBT was thus the only startup that prospered.

WPTF in Raleigh originated as WFBQ in October 1924. Later known as WRCO, that station adopted its present call letters in November 1927. FM radio broadcasts in North Carolina began in 1942.