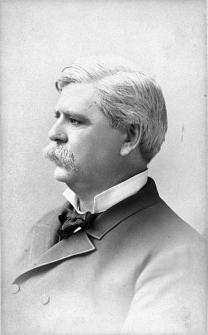 On May 13, 1830, Zebulon Baird Vance was born in the Reems Creek area of Buncombe County. Raised in Asheville, Vance studied at the University of North Carolina. After setting up a law practice in Asheville, he launched his political career.  Known for his personality and oratorical skills, Vance served as a state senator, U.S. congressman and governor.

Initially an opponent of secession, Vance cast his lot with his state and region after President Abraham Lincoln’s call to arms. Vance raised his own company and was later elected colonel of the Twenty-Sixth Regiment.

Though the war raged on, politics was never far from Vance’s mind. The Conservative Party selected the popular colonel as its candidate for governor in 1862. The election resulted in an overwhelming victory for Vance.

On his birthday in 1865, Vance was arrested in Statesville by federal cavalry as he attempted to flee the approaching Union army. He was imprisoned in Washington, D.C., for two months. No charges were ever brought and he was eventually released.

On May 13, 1961, Vance’s 131st birthday, the Gov. Zebulon B. Vance Birthplace State Historic Site in Weaverville was dedicated and opened to the public.