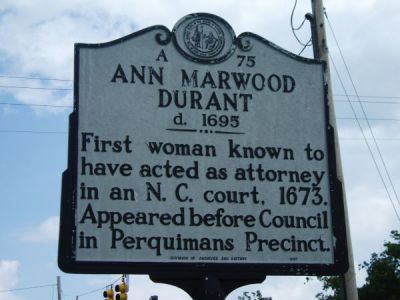 On May 25, 1673, Ann Durant became the first woman to act in the capacity of an attorney in North Carolina. Durant represented Andrew Ball in his successful effort to recover wages due him for work aboard a ship at a proceeding held at the home of council member Francis Godfrey. On at least 20 other occasions she appeared before colonial courts on behalf of herself, her husband or others. She frequently appeared to collect debts owed to her store.

Durant’s court appearances were not the first display of her self-reliance. After marrying George Durant in Virginia in January 1659, the couple moved to their “southern plantation,” settling on the peninsula today known as Durant’s Neck. George Durant served in various capacities in the colony, as speaker of the assembly and as attorney general.

In her husband’s frequent absence, Ann Durant ran their plantation, often providing accommodations for officials attending meetings of the Assembly and Council held at their house. Prisoners were also sometimes held at the Durant home, and it was on their tract that the first public structures in North Carolina, stocks and pillories, were built. She also raised nine children.