An Arrest Over Anti-Slavery Materials 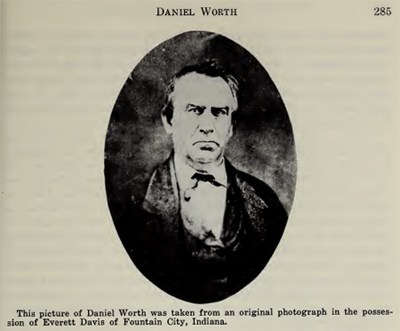 On December 22, 1859, the sheriff of Guilford County arrested Daniel Worth for circulating literature that denounced slavery.

Born near Greensboro in 1795, Worth was likely educated in a school led by Levi Coffin, the reputed “conductor” of the Underground Railroad. Like many other Quakers in the region, Worth moved to the Midwest, settling in Indiana in 1823. In 1857, he returned to North Carolina as a missionary. He preached across the Piedmont, distributing antislavery materials at public gatherings. Newspapers denounced him and called for his arrest.

Worth’s offense was punishable by one year in prison and, at the discretion of the court, a whipping. He was tried and convicted in the spring of 1860 in Asheboro. He also lost upon appeal in Greensboro. Released on a $3,000 bond, he jumped bail and made his way to New York where in May he denounced North Carolina as a “den of slavery.”

He made the rounds in abolitionist circles, including a stop at Henry Ward Beecher’s church, where the famed minister, brother of Harriet Beecher Stowe, proclaimed himself unworthy to unfasten Worth’s shoes.  Worth soon returned to Indiana where he died in 1862.