Battle of Wyse Fork, Overlooked Encounter on the Eve of Bentonville 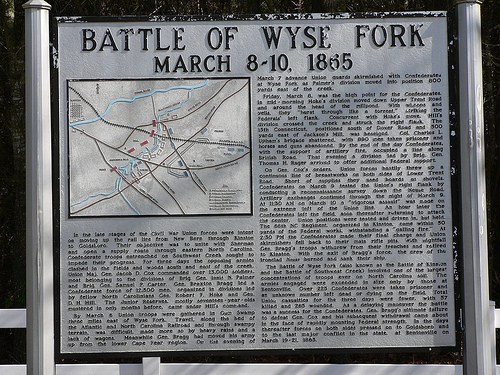 The first day of action would prove to be the high point for Confederate forces. More than 13,000 Union forces under Maj. Gen. Jacob D. Cox were intent on moving up the rail line from New Bern through Kinston to Goldsboro to unite with Gen. William T. Sherman and open a supply route through eastern North Carolina. Around 12,500 Confederate troops under Gen. Braxton Bragg entrenched on Southwest Creek sought to impede Union progress. The two forces clashed there, and the ensuring battle lasted for three days.

The Battle of Wyse Fork involved one of the largest concentrations of troops ever on North Carolina soil. The armies engaged were exceeded in size only by those at the Battle of Bentonville, which would occur just over a week later.

More than 225 Confederates were taken prisoner and an unknown number left dead or dying on the field. Total Union casualties for the three days were fewer, with 57 killed and 265 wounded. As a delaying maneuver, the battle was a success for the Confederates.