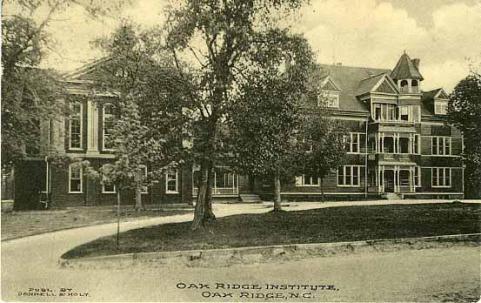 On April 7, 1850, citizens in northwestern Guilford County met and appointed a board of trustees to erect a schoolhouse. The school would eventually become Oak Ridge Academy, the first coeducational military high school in the nation.

Three years later the school opened with a traditional curriculum and 63 male students. In 1861 and 1862, the entire student body and faculty enlisted in the Confederate army. The loss necessitated the school’s closing. Set to reopen in September 1865, the school’s main building burned the night before classes were to resume. The school was moved to nearby cabins and private homes.

Many senior students volunteered for service during World War I, and the U.S. Army began recruiting graduates for service as officers. In 1926, the Army organized a Junior Reserve Officer Training Corps there.

The school changed its name to Oak Ridge Military Academy in 1971, and that same year the school became the first military academy in the United States to admit females. Women had attended the school’s secondary courses since about 1929, but never in a military capacity.

In 1983, the 101-acre campus became a historic district on the National Register of Historic Places.