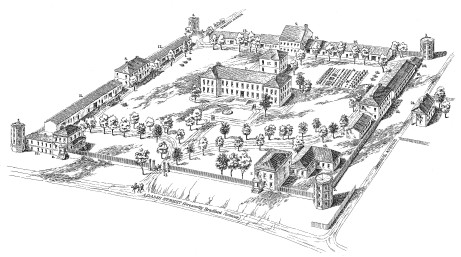 On April 22, 1861, the U.S. Arsenal at Fayetteville surrendered to a force of state militia troops roughly a month before North Carolina seceded from the Union.

At the time of the firing on Fort Sumter 10 days earlier, the Fayetteville Arsenal was guarded by a company of the Second U.S. Artillery. On April 22, the U.S. soldiers were confronted with a large force of nearly 1,000 state militia troops reinforced with artillery.

Former Governor Warren Winslow, acting as agent for then Governor John Ellis, negotiated the surrender of the post, which allowed the federal soldiers to leave with their equipment, but forced them to turn over the arsenal’s equipment to the state. By April 27, the Union artillerymen were able to get transportation to Wilmington, and by May 7, the company had arrived at Fort Hamilton in New York City.

During the Civil War, the arsenal manufactured small arms for the Confederacy with machinery shipped there shortly after secession from Harpers Ferry, Va. One of the arsenal’s better-known products was the “Fayetteville Rifle,” a copy of the US 1855 rifle.

Union Major General William T. Sherman captured the arsenal in March 1865, and had the installation destroyed.