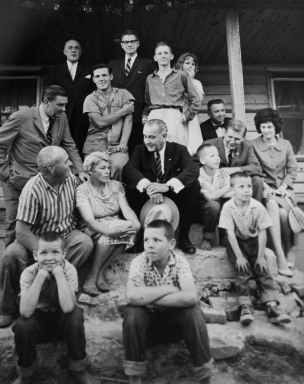 On May 7, 1964, President Lyndon Johnson, accompanied by Governor Terry Sanford, visited the home of tenant farmer William David Marlow near Rocky Mount to promote the President’s “War on Poverty” initiative.

The 15 minute visit was essentially a photo opportunity to launch Johnson’s tour of Appalachia.  There have been questions over the years as to why Rocky Mount was selected, not being particularly close to the mountains, though many have assumed it has something to do with the town’s name.

Though the Nash County family that hosted Johnson didn’t live in Appalachia, it certainly met the rest of the criteria for people to be helped by the president’s programs. Marlow lived with his seven children, his wife and his mother-in-law. A World War II veteran, he suffered from a chronic back injury and earned less than $1,500 per year.

To emphasize the family’s living conditions for the visiting journalists and politicians, the Marlows were instructed to hang a load of laundry on their clothesline and to keep their children barefooted. After the visit, the family struggled with the stigma of poverty. Having never thought of herself as poor, Mrs. Marlow later wrote the president, “We have just found out that we are the joke of a whole nation.”

You can read the speech Johnson gave later that day in front of Rocky Mount City Hall online from the American Presidency Project.