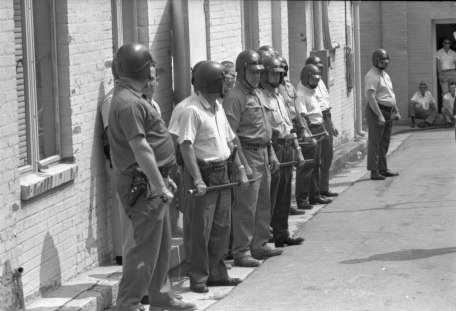 On May 11, 1970, Henry Marrow, a 23-year-old African American Vietnam veteran, was murdered in Oxford.  Marrow was approaching Robert Teel’s store to buy a Coca-Cola when he spoke to a young white woman. Teel, his son and his step-son interpreted the exchange as offensive, so they chased Marrow from the store parking lot, beat and fatally shot him.

Oxford had remained segregated and violence against blacks in the town was met with a blind eye.  Marrow’s murder served to unite the African American community, already outraged by years of Jim Crow oppression.

Mobs rioted and destroyed several local businesses including Teel’s. After Marrow’s funeral, mourners marched to the town’s Confederate monument and held a rally for civil rights. Marrow’s cousin, Benjamin Chavis, organized a boycott of white-owned businesses.  Despite the outrage, an all-white jury returned a not guilty verdict on all counts against the Teels in the trial for Marrow’s murder.

Historian Timothy B. Tyson, who was a 10-year-old boy living in Oxford at the time of the murder,  explored Marrow’s death and its effects on the community in his award-winning 2004 book Blood Done Sign My Name.