George Denny and the Beginnings of Talk Radio 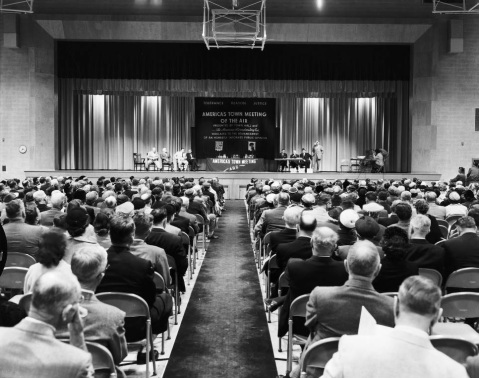 On May 30, 1935, “America’s Town Meeting of the Air” debuted on the radio. The show, America’s first political talk program, was hosted by Washington, N.C., native, George V. Denny, Jr.

With dreams of being an actor, Denny moved to New York after attending UNC. Finding no work in the theater, Denny worked briefly in outreach at Columbia University before being hired by the League for Political Education, which at that time focused primarily on hosting political lectures.

Denny eventually rose to become the organization’s director, and pitched the idea of a radio show featuring guests with opposing viewpoints debating the major issues of the day. As the show’s moderator, he formatted the show like an old town hall meeting in which audience members could engage with the guests. The format gave the show its energy and popularity.

The show’s first episode was called “Which Way America? Fascism, Communism, Socialism or Democracy,” and was picked up by only 18 stations. After six episodes, NBC agreed to carry the program across its network and, at its peak, it attracted more than 3 million listeners weekly.

Denny served as the program’s moderator until 1952. The program left the air in 1956.