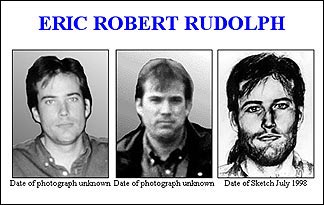 On May 31, 2003, fugitive Eric Rudolph was captured in Murphy. Indicted in 2000 for deadly bombings in Atlanta at the 1996 Olympics and in Birmingham in 1998, Rudolph fled into North Carolina’s Nantahala Forest. Often described as a survivalist, he was familiar with the area since he had been raised in the rugged region. An initial massive search for Rudolph proved unsuccessful.

On the day he was found, rookie police officer Jeffrey Postell spotted someone with what appeared to be a gun behind a grocery store.  It was about 3 a.m. when Postell spotted the figure running away from him and, after calling it in, left his patrol car and drew his weapon.

A man came out of hiding and surrendered but did not identify himself.  Two other law enforcement officers responded to Postell’s call and one, a Cherokee County sheriff’s deputy, thought the man resembled Rudolph.

At the detention center, the three men found the FBI Most Wanted poster and compared it to the man before them.  After hiding out for five years, Eric Rudolph was arrested, pled guilty to the bombing charges and is now serving four life sentences in a maximum security prison in Colorado.