Hundreds of well-wishers looked on as 30 immigrants from 23 countries officially became American citizens at the State Capitol this Fourth of July, and Cultural Resources Secretary Susan Kluttz was proud to be there to help officiate. After the Oath of Allegiance was administered and America welcomed its 30 newest citizens, a military-style band played, kicking off a day of revelry that included musical performances, historical and military displays, carriage rides, face painting and hands-on activities for kids. 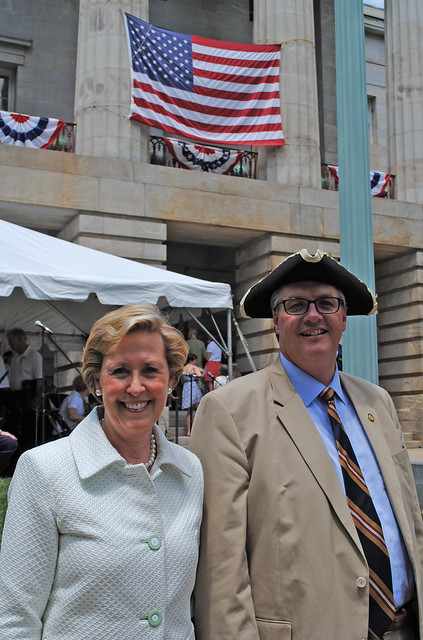 Soon back on the road, the Secretary had another Independence Day celebration to attend at Historic Halifax. In Halifax, Secretary Kluttz toured the site with Assistant Site Manager Carl Burke before working a hand-operated printing press.

Though the Secretary had been to Halifax before for a session with a number of organizations and state Sen. Angela Bryant on how to leverage the the area’s rich history for economic development, she hadn’t yet seen the impressive Montfort Archaeology Exhibit, which combines panel exhibits with walkways over archaeological excavations around the foundations of a home which demonstrates what life was like for a wealth early resident of Halifax.

The day rounded out with more fun Fourth of July activities, including food and fireworks. In short, the Secretary and Deputy Secretary Kevin Cherry were excited to spend Independence Day in the town where independence from Great Britain was first called for by a state assembly.

WRAL did a great story on the ceremony at the Capitol, and photos from the entire event are available on the Capitol’s Flickr site.