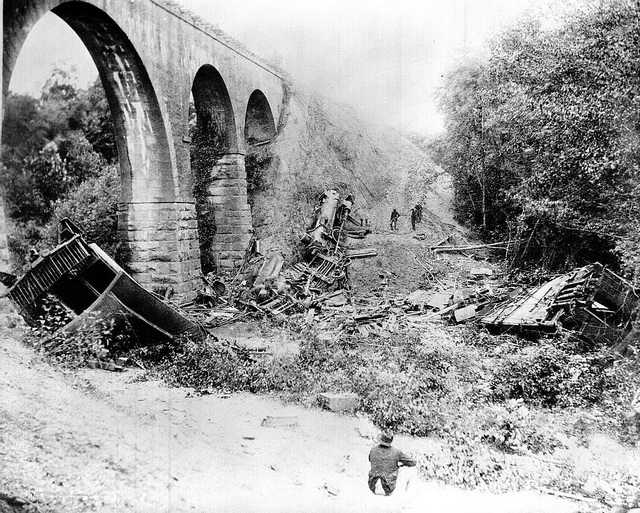 On August 27, 1891, one of the worst train wrecks in North Carolina occurred at the Bostian Bridge, two miles west of Statesville.

In the wee hours of the morning, a westbound passenger train jumped the tracks and hurtled off the 60-foot high bridge. At the bottom of the fall, seven train cars crashed into Third Creek. A few of the passengers walked into Statesville for help. Others crawled out of the wreckage, dazed and confused, while some wandered around. Still others sat on top of the train cars until help arrived.

When that help did come in the form of Statesville townspeople, the group began to pull and cut people out of the wreckage. Since the water in the creek was high, some of the injured drowned. By dawn a large crowd of townspeople had arrived and began to move the dead and wounded into town.

The dead were laid out in the Farmers’ Tobacco Warehouse. Twenty passengers were killed outright and nine were seriously injured. About 20 more received minor injuries.

The Bostian Bridge train wreck has been the subject of many ghost hunting expeditions, as a ghostly specter of the train is said to be seen each year on the anniversary of the tragedy.