The Mystery of Beautiful Nell Cropsey 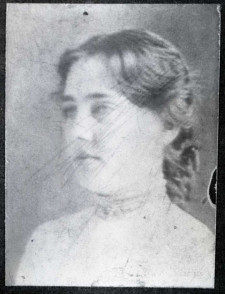 On November 21, 1901, Nell Cropsey, disappeared from the front porch of her family home near the Elizabeth City waterfront.  The Cropsey family had moved to Elizabeth City from New Jersey in 1898.

The case grabbed national media attention, making newspaper headlines up and down the east coast.  The night Nell disappeared she had broken up with her boyfriend of three years, Jim Wilcox. After spending the evening together in the parlor with her sister Ollie and her boyfriend, the couple stepped onto the front porch and into legend. Wilcox maintained that he left Nell there on the porch after she broke up with him. Nell never returned to the house and was found in the Pasquotank River 37 days later.

Wilcox was arrested and tried. The case, built on circumstantial evidence, was a sensation in its own right. Protesters and mobs interrupted the first trial until the judge declared a mistrial and ordered a new trial in a nearby county. Wilcox was eventually convicted but in 1920 received a pardon from Governor Thomas Bickett. Fourteen years later Wilcox took his own life.

Nell Cropsey’s death remains a mystery, at least for some.