New Years and the Lowly Opossum 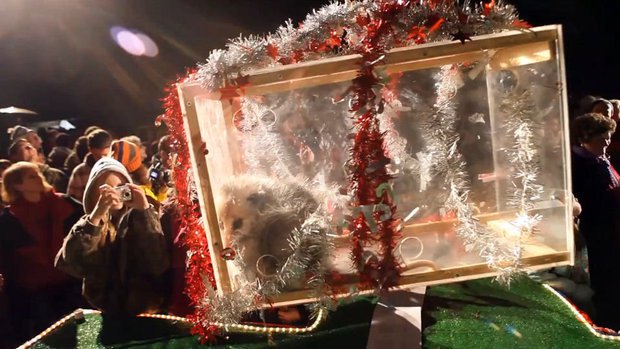 On December 31, 1990, Brasstown residents began their tradition of the “Possum Drop” when Clay Logan dropped a ceramic possum from the roof of his convenience store.

The tradition began because local human inhabitants call the Clay County village the “Opossum Capital of the World.” While this claim may be difficult to prove, the town has become known internationally from news coverage of its offbeat approach to ringing in the New Year.

The first event was small, but it quickly became a community affair with the use of live specimens of North Carolina’s official State Marsupial. Today the bash is billed as a family event, with music and a Miss Possum drag queen contest.

In recent years, the use of living creatures has come under criticism from animal rights activists, resulting in the drop of a road kill possum one year and of a box covered with possum pictures in 2013. Controversy surrounding the event has involved lawsuits by the activist group PETA and the passage of a 2013 state law allowing for lawful capture and release of the creature, presumably to support possum drop activities.

After an additional legal challenge by PETA, the 2014 General Assembly passed H.B. 1131 allowing opossum trapping only in Clay County each year from December 26 to 31.