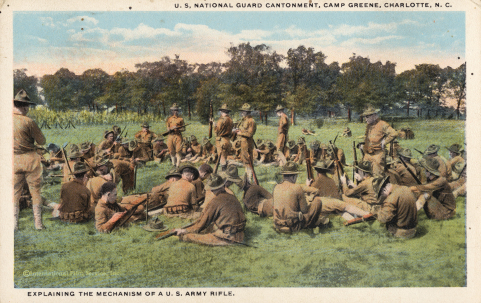 That summer, Major General Leonard Wood, charged with selecting sites for new military camps, visited Charlotte as part of a tour of prospective locations in North Carolina. Wood chose the Queen City as the site for Camp Greene, a 2,300-acre military training facility for the Army.

Named for Revolutionary War hero Nathanael Greene, the camp was constructed in 90 days, and by December it was a temporary home to nearly 60,000 soldiers.

The camp boosted Charlotte’s fledgling economy and the city’s population of 45,000 witnessed a major increase in jobs and wealth as restaurants, shops and other amusements directed at the soldiers were constructed. Unfortunately, the camp also spread communicable diseases. The winter of 1917 proved incredibly harsh and hundreds of soldiers and citizens succumbed to pneumonia. The following year, the influenza epidemic struck the camp and the city.

Many men who trained at Camp Greene ultimately were deployed to France and saw some of the heaviest fighting of the war. At the war’s end, the camp was dismantled, and it was closed officially in June 1919.