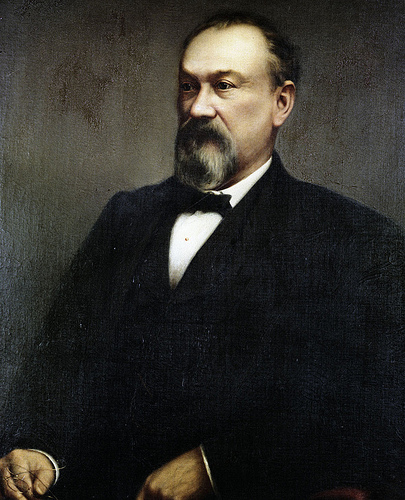 Born to a prominent Alamance County family of textile manufacturers, Holt worked in his family’s factories while climbing the political ladder. He got his start in politics as an Alamance County commissioner, before serving in both houses of the General Assembly and rising to the post of Speaker of the House.

Holt was lieutenant governor when Governor Daniel Fowle died in office in 1891, so the state’s top job fell to him. He served as governor until 1893, filling out Fowle’s term. He chose not to seek re-election for health reasons.

Throughout his career, Holt was interested in education. He helped found, among other institutions, two colleges in Greensboro and what’s now N.C. State University. He was also active in business and agriculture, serving as the North Carolina Railroad Company’s president, directing the North Carolina State Fair and transforming his family’s business into one of the leaders in the textile industry.

He died at his family home in Haw River and is buried in Graham.