Supervisor of Historical Research Michael Hill and Head of the State Archives’ Microfilm Imaging Unit Chris Meekins joined re-enactors from the Latham’s Battery group, which is based out of North Carolina, for a ceremony at our state’s monument to honor the troops who served there. 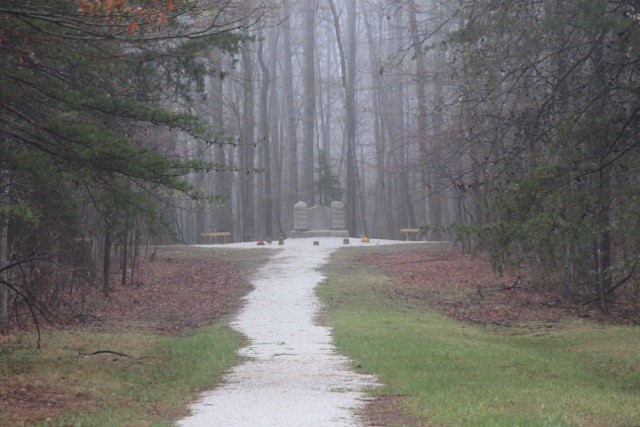 The monument marks the point of the last advance made by North Carolina troops at the Battle of Appomattox Court House on April 9, 1865. That last advance is one of the origins of the popular phrase “First at Bethel, Farthest to the Front at Gettysburg and Chickamauga, and Last at Appomattox,”popularly used throughout much of the early 20th century to describe North Carolina’s role in the Civil War.

The monument, which honors the more than 5,000 North Carolina troops that were paroled at the Appomattox surrender, was dedicated in 1905 by a delegation that included then Governor Robert Brodnax Glenn.

The ceremony comes not only as we remember the 150th anniversary of the end of the Civil War, but also as the Museum of the Albemarle opens an exhibit exploring the monuments that cropped up across North Carolina after the close of the conflict and a recent acquisition by the State Archives that highlights a company of Tar Heels present at Appomattox.

More images of the monument ceremony are available on our Flickr site.