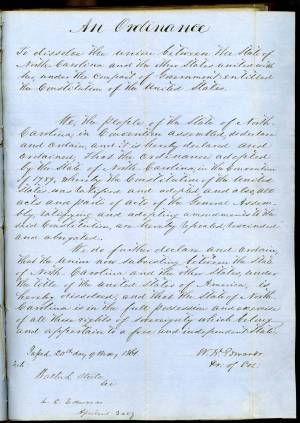 Between February and May 1861 much happened that shaped the delegates’ decision. After South Carolina passed a Secession Ordinance in December 1860, one attempt after another to stem the Secession Crisis failed. North Carolinians adopted a “watch and wait” attitude after the election of President Abraham Lincoln.

The April 12 bombardment of Fort Sumter by the budding Confederate government prompted Lincoln to call for troops to put down the rebellion. Deeming such a call an illegal use of Federal power, Governor John Ellis replied that Lincoln would get no aid from North Carolina.

Ellis called for a convention. The delegates debated the wording of the resolution but not the outcome. Divided sentiments expressed earlier were not voiced and the vote to pass the resolution became unanimous. Shortly thereafter the state aligned with the Confederacy.