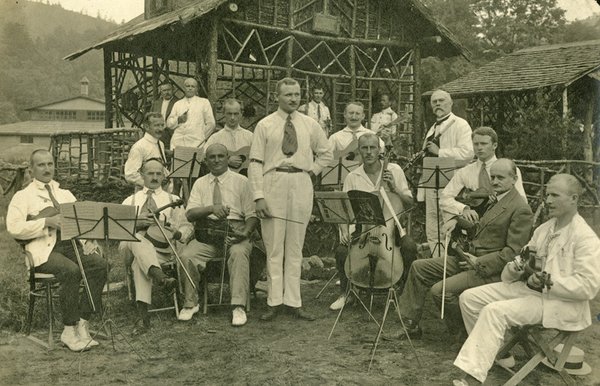 On June 8, 1917, the first of 2,300 Germans arrived by train at Hot Springs to begin life in a World War I internment camp. Their civilian merchant ships had been docked in various American ports two months earlier when the United States entered the war. At that time, the government seized the German vessels and declared their officers and crews “alien enemies.”

Unable to return the men home while war was raging, the government leased the luxurious Mountain Park Hotel in Hot Springs to house them. Each of the hotel’s 200 steam-heated, electric-lighted bedrooms accommodated between three and five German officers, while rows of barracks and accessory buildings were constructed on the resort’s grounds and golf course to house crew members.

When not farmed out for harvesting lumber or road building projects, homesick internees inside the barbed wire-enclosed camp created a Bavarian village—including houses, a church and even a carousel—using driftwood from the French Broad River, tin cans and other materials. They also crafted furniture, grew gardens and played sports. A German brass band provided concerts for the townspeople every Sunday afternoon.

After living in the camp for 17 months, many internees developed close friendships with local families. Some returned to visit after the war ended.