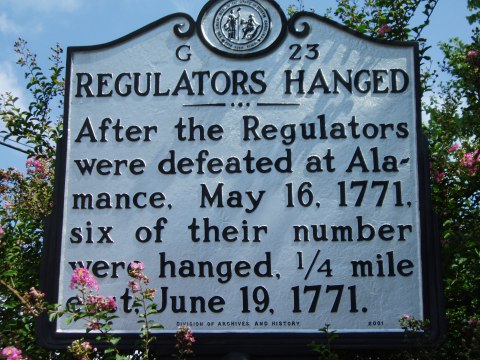 On June 19, 1771, six Regulators were hanged in Hillsborough following the Battle of Alamance on May 17.

The hanging represented a culmination of the War of Regulation and the “backcountry” rebellion by Orange County Regulators. Like many of those throughout the colonies discontented with the control of and taxation by the British government, the Regulators wanted the Currency Act of 1764 and the Stamp Act of 1765 to be repealed.

As both sides anticipated confrontation, Regulators sent petitions to Governor Tryon, then camped out on Alamance Creek with 1,400 troops, on May 14 and May 16. Tryon rejected the Regulators’ terms and a battle broke out until the Regulators retreated.

Several Regulators were captured and tried. After the trial, Tryon pardoned six men and sent the others – Benjamin Merrill, Captain Robert Messer, Robert Matear, James Pugh and two other unrecorded men – to be hanged not far from the courthouse in Hillsborough. Their exact burial location is unknown.

The site of the hanging was memorialized in 1963 by a marble slab monument erected by the N.C. Society of the Colonial Dames in America and placed next to the historic Hughes Academy schoolhouse in Hillsborough.

Check out NCpedia’s resources on the Regulators and Battle of Alamance for more information on this topic.