“Die With It in You!”: The Execution of Frankie Silver 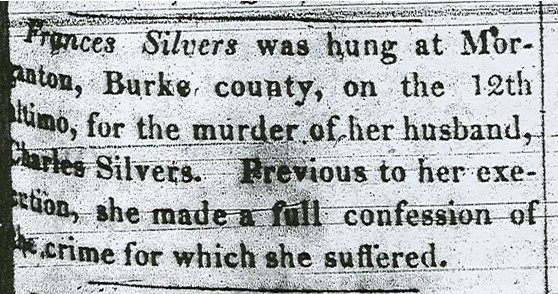 On July 12, 1833, Frankie Silver was hanged in Morganton after being convicted of killing her husband Charlie with an axe and hacking his body into pieces.

The murder occurred just before Christmas in 1831. Though at first Frankie claimed that Charlie had gone hunting, his family suspected foul play when he did not return for the holiday. A search party found no sign of him, and the mystery seemed unsolved until a neighbor found pieces of bones and human teeth among the ashes in the fireplace inside the Silvers’ Mitchell County cabin. More human remains were discovered beneath the floorboards, buried in the yard and hidden in a stump.

Frankie was arrested for first-degree murder, though little hard evidence was presented during the two-day trial. The jury found Frankie guilty, and the judge sentenced her to execution by hanging. She was 18-years-old was and the mother of an infant daughter.

Since the law at the time did not allow women to testify in court, Silver never told her story before a judge. Even at the gallows, when she started to speak her last words, Silver’s father shouted to her from the crowd, “Die with it in you, Frankie!” Sadly, she did.