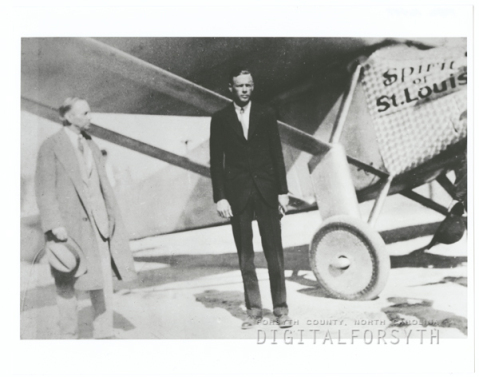 On October 14, 1927, Charles Lindbergh landed at Lindley Field in Greensboro to celebrate its opening.

Greensboro businessmen in the 1920s touted their city as the site for a major airport, their city being the mid-point between northern cities and those in the Deep South. Leaders from Greensboro, High Point and Winston-Salem worked to establish an air field on property purchased by Guilford County and Greensboro from Paul C. Lindley in 1927. Drawing visitors to the opening ceremony for Lindley Field was national hero Charles Lindbergh in his famous airplane, Spirit of St. Louis.

Lindbergh completed the first nonstop solo flight from New York to Paris in May 1927. Drawing on his success, he flew throughout the United States to encourage air flight. He visited Lindley Field as part of a three-month tour that took him to forty-eight states and eighty-two cities, racking up 147 speeches and 1,290 miles of parade routes.

As a result of his tour, interest in the uses of air flight, particularly the use of air mail, exploded.  Lindbergh’s Greensboro visit, one of only two in North Carolina during the tour, highlighted the potential prominence of the city as an aviation center.