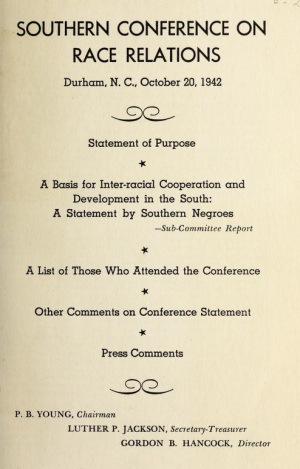 On October 20, 1942, 57 African American professionals from across the South convened the Southern Conference on Race Relations in Durham at what is now North Carolina Central University.

Chiefly responsible for the gathering was Gordon B. Hancock, a nationally-syndicated columnist and professor at Virginia Union University in Richmond.

The group, made up of ministers, physicians, educators, businessmen, labor officials and social workers, was mostly male, with only five women in attendance. P. B. Young of the Norfolk Journal and Guide lent his paper’s support. Delegates divided themselves into seven committees to look at political and civil rights, industry and labor, service organizations, education, agriculture, military service and social welfare.

Benjamin Mays, president of Morehouse College in Atlanta, called for the group to draft a conference statement. The product was the “Durham Manifesto,” a call for a middle ground on civil rights, rejecting unequivocal denunciation of segregation and calling for the nation to address issues of racial discrimination. Louis T. Austin, editor of the Carolina Times in Durham, was largely unsupportive of the effort.

The group in time laid the groundwork for the creation of the biracial Southern Regional Council.