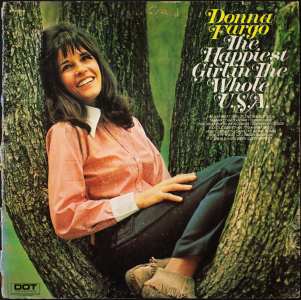 After growing up in North Carolina, Vaughan moved to California, where she finished college and began teaching English by day and singing in Los Angeles clubs by night. She met Dan Silver who agreed to be her manager and, shortly, her singing career took off.

In 1966, the couple, who would eventually marry, moved to Phoenix. There she adopted the name Donna Fargo and began recording. Although she had not achieved wide commercial success, Fargo was named the Academy of Country Music’s “Top New Female Vocalist” in 1969.

Fargo, who wrote her own songs, signed with Dot records in 1972 and released “The Happiest Girl in the Whole USA,” which topped the county music chart and peaked at #11 on the Billboard Hot 100 pop chart. Her follow-up song, “Funny Face,” performed even better. Both were proclaimed gold records.

The next year Fargo logged more country music hits, won a Grammy Award and was named “Top Female Vocalist” by the Academy of Country Music.  Her songs have been recorded by a variety of artists.

In 2015, a section of highway in Mount Airy was named in her honor, billed as “the Happiest Road in the Whole USA.”