The Light at Cape Hatteras 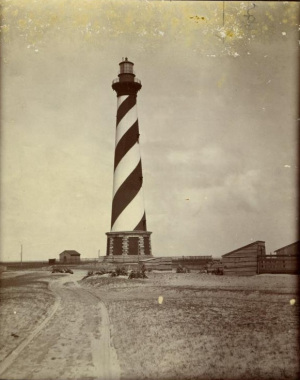 On December 16, 1870, the specially-designed Fresnel lens of the Cape Hatteras Lighthouse was lit to mark Diamond Shoals. The lighthouse lit in 1870 is counted as the second of three at Cape Hatteras.

In 1794, Congress authorized the original 90-foot sandstone tower, completed in 1802. By the 1850s, complaints were voiced about the inadequacy of its light and, in 1861, during the Civil War, it was damaged by Union shelling.

After the war, top priority was given to the construction of a new lighthouse. Upon completion, the lighthouse, measuring 180 feet from the foundation to the light, and 208 feet from the base of the building to the top of its roof, was the world’s tallest. It remains the tallest brick lighthouse in the country.

In 1935, shoreline erosion threatened the lighthouse and it was abandoned. In its place, a skeleton tower was built to the northwest above Buxton Woods. The Civilian Conservation Corps helped stabilize the area and, in January 1950, the 1870 tower was reactivated.

In 2000, the National Park Service moved the lighthouse one-half mile west to save it from the encroaching Atlantic Ocean. The lighthouse is open to the public on a seasonal basis.