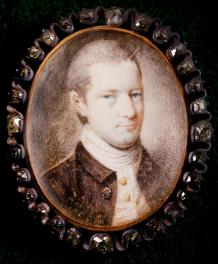 As a young man living in Jamaica, Stanly partnered with shipping merchants to export cargo from the Caribbean to the American colonies. One partnership proved disastrous; a Philadelphia merchant accused Stanly of owing him money and Stanly was sent to debtor’s prison in 1768.

Eventually able to clear his name, Stanly left Philadelphia for South Carolina in 1772. While en route to Charleston, a shipboard friendship with a North Carolina resident and a storm off Cape Hatteras led Stanly to New Bern, where he discovered a town full of opportunity.

In New Bern, Stanly became a successful ship owner and merchant. He was also a privateer for the Patriot cause during the Revolution, loaning General Nathanael Greene substantial sums for his North Carolina campaign. After the war, Stanly invested in his adopted town’s future, becoming the New Bern Academy’s first president. He died in 1789 of yellow fever.