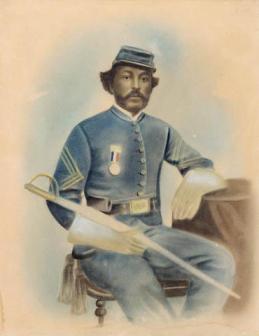 An 1865 drawing of Parker Robbins in the collection of N.C. Museum of History

On January 1, 1864, Parker Robbins of Bertie County, a free person of color of mixed African and Native American descent, enlisted in the 2nd United State Colored Cavalry Regiment at Fort Monroe, Va. Federal military authorities in eastern North Carolina began actively recruiting and enlisting African Americans for the United States Colored Troops in 1863, eventually establishing one artillery and three infantry regiments. Those wishing to join a mounted unit had to travel to Virginia to join. Robbins and his younger brother both did just that.

With few exceptions, blacks were not allowed to hold commissioned ranks as officers, and the highest rank available was that of sergeant major. Robbins was promoted from private to sergeant major 10 days after his enlistment. He saw combat in southeastern Virginia and northeastern North Carolina. After the war, he returned to Bertie County, where he was chosen as a delegate to the 1868 constitutional convention and served two terms as a state representative.

Robbins then moved to Duplin County. He went on to own a steamboat, sawmill, and cotton gin, and secure several patents. He received a pension for his service and was active in local Union veterans’ affairs until his death in 1917.