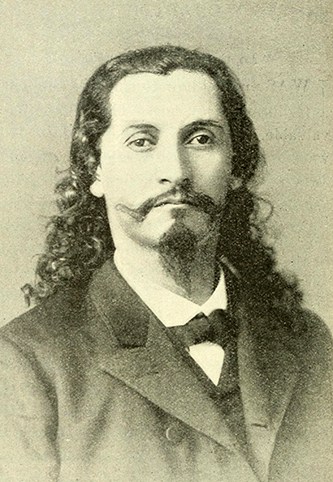 A picture of Cherokee Chief and Solidifier Nimrod Jarrett Smith

On January 3, 1837, Nimrod Jarrett Smith was born near what is now Murphy at the height of the Cherokee removal. He was raised in the Cherokee communities of Valley Town and Cheowa but was also well acquainted with William Holland Thomas and the Oconaluftee Cherokees. During the Civil War, he enlisted with Thomas’s 69th N.C. Volunteer Infantry, also known as the “Thomas’s Legion,” rose to the rank of 1st Sergeant of Company B.

Smith was deeply involved in post-Civil War Cherokee politics. During this pivotal time, the North Carolina Cherokees sought not only to solidify their landholdings but also their very existence in the state. At a Grand Council held at what is now Robbinsville, in 1868, the body politic of the Eastern Band of Cherokee Indians was created.

In 1880, Smith was elected the third Principal Chief of the EBCI.  He centralized Cherokee politics around his farm in modern-day Cherokee. During his tenure, Smith developed an education system in cooperation with Quakers, who constructed an industrial school and a common school. Smith’s most important effort, though, was gaining official state recognition of the Eastern Band of Cherokee Indians, in 1889.

Smith served as Principal Chief until 1891. Learn more about Smith and the Cherokee in Native Carolinians: The Indians of North Carolina from N.C. Historical Publications.