Origins of BB&T in Wilson 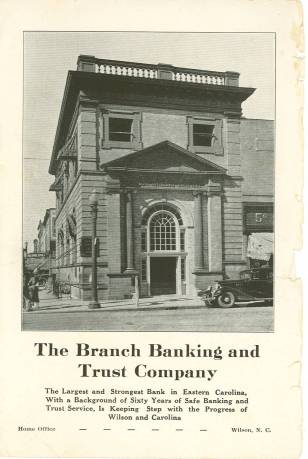 A 1934 ad for Branch Banking and Trust. Image from
the Wilson County Public Library.

The son of a successful Halifax County planter, Branch was a Confederate veteran and merchant who moved to Wilson in 1865. His first enterprise was a mercantile business. He entered banking in 1872 when he founded Branch and Hadley Bank in Wilson with his friend Thomas Jefferson Hadley. The pair was interested in starting a bank so that local people could have a trustworthy local financial intuition, and as such, the small private firm mostly supported businesses and farmers in the young town.

In 1887, Branch purchased Hadley’s share of the business and changed the name to Branch and Company, Bankers. Two years later, Branch, Hadley, and a few other Wilson men secured a charter for a state bank and initially called it Wilson Banking and Trust Company.

Just before Branch’s death, the charter was amended to The Branch Banking Company. Branch’s private bank was incorporated into the rest of the business in 1900, and the name was changed in 1912 to Branch Banking and Trust Company to reflect its distinctive trust department.