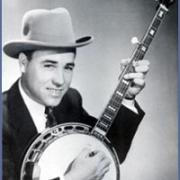 On January 6, 1924, Earl Eugene Scruggs was born near Shelby. The renowned bluegrass banjo musician elevated the banjo known for his distinctive three-fingerpicking style, now named for him.

Scruggs formed the Foggy Mountain Boys with Lester Flatt in 1948. The group soon gained success, playing radio stations across the South and recording for Mercury and Columbia Records. In 1962, The Beverly Hillbillies debuted on television with Flatt and Scruggs performing the theme song. The single version of that song quickly rose to number one on the country charts, and Flatt and Scruggs made a number of appearances on the popular sitcom.

The group became the first country act to have their own syndicated television series; The Flatt and Scruggs Grand Ole Opry Show ran from 1955 until the duo broke up in 1969. Scruggs then formed the Earl Scruggs Revue with his three sons.

In addition to inspiring a generation of banjo players, Scruggs received a number of honors, including two Grammy Awards. He was also inducted into the Country Music Hall of Fame and the International Bluegrass Music Hall of Fame. Scruggs recorded and performed until his death in 2012.