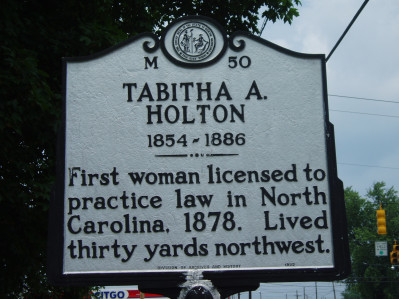 On January 9, 1878, Tabitha Holton became the first woman licensed to practice law in North Carolina.  Born in 1854 near Jamestown, she had three brothers, all of whom were attorneys. She is said to have gained her training in the law from having tutored her siblings.

In January 1878, Holton traveled to Raleigh with her brother Samuel to take the bar examination administered by the state Supreme Court. The court questioned whether it could admit a woman, but a family friend, Albion Tourgee stepped up to say it could. He relished the chance to argue Holton’s case up against an old nemesis, former state Supreme Court Justice and UNC professor William H. Battle.  Battle made the argument that a southern lady should not be “permitted to sully her sweetness by breathing the pestiferous air of the courtroom.”

Tourgee carried the day, and Holton was permitted to take the exam, which she passed. She and her brother Samuel opened a practice across from the courthouse in Dobson. They advertised their services as attorneys-at-law in a local newspaper in 1881, but county court records include only a single instance where Tabitha appeared in court. She died in 1886 at the age of 32.

Check out this great timeline of women’s history in North Carolina from the N.C. Museum of History for more great stories.