Vestige of the Age of Steam, the Albemarle and Chesapeake Canal 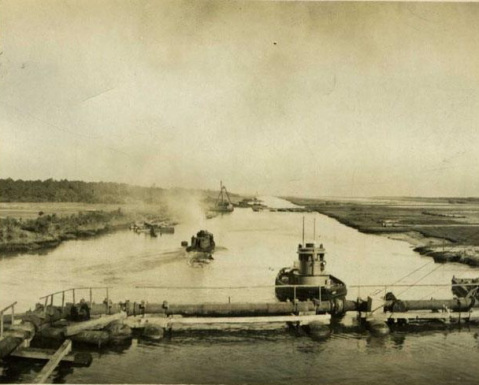 Tugboats on the Albemarle and Chesapeake Canal, circa 1930-1938.
Image from the N.C. Museum of History.

The canal was first proposed by William Byrd II in 1728, but engineering complications held up the project. The full canal was 75 miles long, but only 14 of those cut through the land. Of those miles, only five are in North Carolina, essentially bisecting Currituck County at Coinjock. The rest of the canal followed natural channels and dredged rivers.

Construction was authorized by bills introduced in both the North Carolina and Virginia legislatures in 1854. Bonds to pay for the project, totaling just over $1 million dollars, were sold in the two states.

Though the nearby Dismal Swamp Canal had been dug by hand 50 years earlier, newly invented steam dredges were used to cut through massive stumps, roots and buried logs on the Albemarle and Chesapeake project. 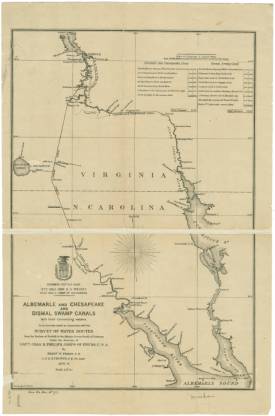 A circa 1878-1879 map of the Albemarle and Chesapeake and Dismal Swamp Canals. Image from UNC-Chapel Hill.

During the Civil War, the canal was the site of partisan action with ships sunk at the mouths to block entry. After the war commercial use increased, especially by steamship lines.

The canal’s operation was taken over by the federal government in 1913. Today the canal is still in use, mostly by recreational watercraft, as part of the Intracoastal Waterway.