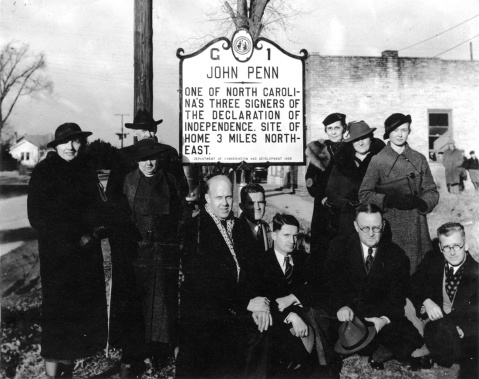 The dedication of the first highway historical marker in 1936.
Image from the Office of Archives and History.

On January 10, 1936, the first state highway marker was dedicated. The first marker was placed in the small Granville County town of Stovall to commemorate the life of John Penn, an early political leader and signer of the Declaration of Independence.

Though not authorized until 1935, the program has its roots in the 1903 legislation creating the North Carolina Historical Commission, which noted the lack of markers “commemorating the services of eminent sons of the state, or marking the sites of historic events.”

Christopher Crittenden, longtime secretary of the commission, spearheaded the effort to found the program. Modeled after a similar program Virginia started in 1926, the State Highway Historical Marker Program was officially created after the General Assembly appropriated $5,000 and established an advisory committee for the purpose of placing markers in January 1935.

Crittenden gathered suggestions for markers from citizens around the state, and the committee, made up of college professors who were experts in North Carolina history, selected Penn for the first marker.

The program continues today as a joint effort of the state departments of Natural and Cultural Resources and Transportation. Since 1935, more than 1,600 state highway historical markers have been erected. At least one stands in every county.

Explore the history in your backyard with the Highway Historical Marker Program’s interactive map and database search tool.