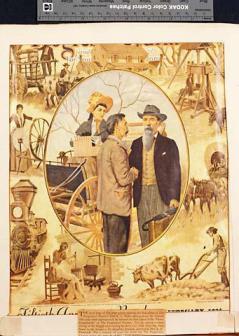 A 1956 reprint of the first issue of The Progressive Farmer is now in the collection of N.C. Museum of History

On January 10, 1881, Clarence Poe, a social and agricultural reformer, was born. During his more than 50 years at The Progressive Farmer, Poe became one of the most influential opinion-molders in the modern South. Born in Chatham County and never educated beyond grade school, Poe was eventually the recipient of five honorary doctorates. At age sixteen he became a writer and office boy for the Raleigh-based magazine founded by L. L. Polk. Two years later he became the editor, and in 1903, he purchased the publication for $7,500 and became its publisher. During the next several decades the journal became the preeminent agricultural publication in the South.

Through his speeches, books, and editorials, Poe promoted numerous Progressive initiatives such as “two-armed farming,” the idea that farmers should diversify into both crops and livestock.  Poe crusaded for better rural education and cooperative marketing.

Although he was urged to run for governor in 1940, Poe never sought political office. He never learned to drive and rode a horse three miles to work every working day. Although he officially retired in 1954, he continued to contribute to and serve as editor-in-chief of The Progressive Farmer until his death in 1964.