Tab Smith and the Birth of Rhythm and Blues 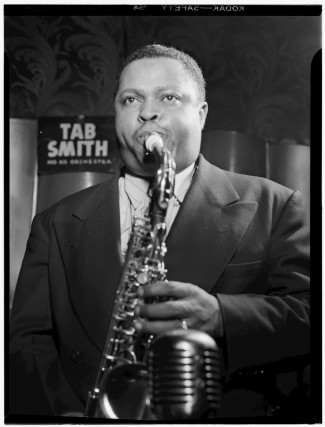 Smith’s first professional musical endeavor came in 1929 when he formed the Carolina Stompers in 1929, and he soon achieved national acclaim as part of bands fronted by Count Basie and Lucky Millinder.

Through the 1940s he recorded with some of the finest performers, including Billie Holiday, Earl Hines, and Coleman Hawkins. His peers on the alto sax included Johnny Hodges of the Duke Ellington Band and Earl Bostic.

With the evolution of musical tastes, Smith gravitated toward rhythm and blues in the 1950s, recording primarily on United Records. His version of the Tony Bennett hit “Because of You” was a chart-topper in 1951. Most of Smith’s numbers were short and were favorites on jukeboxes.

He recorded a sax version of “Try a Little Tenderness,” later covered by Otis Redding, and toured with the Five Royales, based in Winston-Salem, in the mid-1950s.