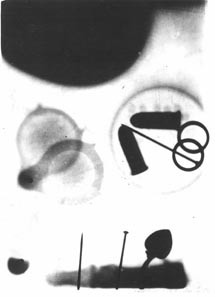 On January 12, 1896, three students at Davidson College experimented with x-rays.

Six days earlier, the Associated Press announced that German physicist Wilhelm Roentgen had discovered a new form of radiation. While experimenting with cathode rays, he discovered that mysterious “x”-rays passed through a variety of objects. He put his hand in front of the rays and saw the silhouette of his bones. At the time, many physics labs had the equipment to duplicate the x-ray. Henry Louis Smith, a physics professor and future president at Davidson, was the first professional in North Carolina to work with x-rays.

It was a group of Smith’s students who appear to have been the first people in the state to perform x-ray experiments. Three juniors professed to have bribed a janitor to let them into the building housing the physics equipment less than a week after Roentgen’s announcement reached America.

The students placed objects on photographic paper taking photographs, then called roentgenograms, of objects including an eggshell with a button in it, a rubber-covered magnifying glass, a cadaver’s finger, pins, cartridges, and paperclips.

Years passed before the students’ escapade was made public. The original x-ray images are now housed in the Davidson College Archives.