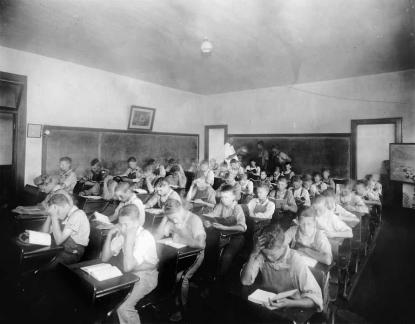 Boys in class at the Stonewall Jackson Training School, circa 1900-1920. Image from the N.C. Museum of History.

On January 12, 1909, Stonewall Jackson Training School, a state correctional facility for juvenile male offenders, opened near Concord. The effort to establish the facility was led by James P. Cook, editor of a Concord newspaper. Cook witnessed the prosecution of a 13-year-old boy, who received a three-and-a-half-year sentence to serve on a chain gang for petty theft in 1890. Determined that such a system was unjust, Cook devoted the next 17 years of his life to campaigning for a better alternative.

Success came only after a party of Confederate veterans sponsored the bill that supported the school’s construction. Supporters suggested naming the institution after Confederate icon Thomas J. “Stonewall” Jackson and the General Assembly agreed.

Male offenders under the age of 18 were remanded to Stonewall Jackson Training School in lieu of prison time. At its peak, the school’s population reached nearly 500 students, and while at the school, the young men lived in a series of dormitory-style buildings and received an academic education while also learning a trade.

Students worked in industries including shoemaking, printing, barbering, textiles, and machining. Many of the young men worked on the school’s farm, learning modern agricultural techniques and maintaining the fields and cattle herds that supported the school.