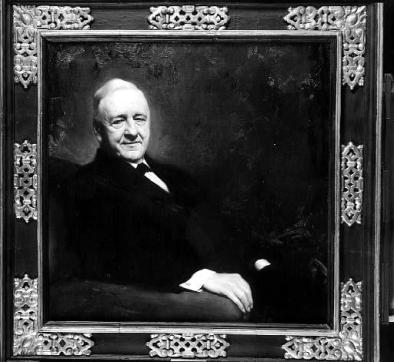 A portrait of Josephus Daniels in the collection of the N.C. Museum of History

On January 15, 1948, Josephus Daniels, newspaper editor and former Secretary of the Navy, died in Raleigh. While at school in Wilson, Daniels developed a love of journalism and became the local editor of the Wilson Advance. He later bought the newspaper, and over the next few years purchased several other papers with various partners.

Daniels remained a loyal Democrat throughout his career. In 1892 he received an appointment to a post in the Department of the Interior. He held the position for two years before returning to North Carolina, having just recently purchased the Raleigh News and Observer at a public auction.

Because of his staunch support of the Democratic Party in the early 1900s, Daniels became close friends with President Woodrow Wilson. He served as Wilson’s publicity chief during the 1912 campaign and was appointed Secretary of the Navy, a post he held through both of Wilson’s terms. In 1921, Daniels returned to Raleigh and his beloved newspaper.

Franklin D. Roosevelt appointed Daniels ambassador to Mexico in 1934, a post he held for 7 years. Later in life, Daniels wrote a series of memoirs. Daniels remained active until his death from pneumonia. He was buried in Oakwood Cemetery in Raleigh.