The Fall of Fort Fisher 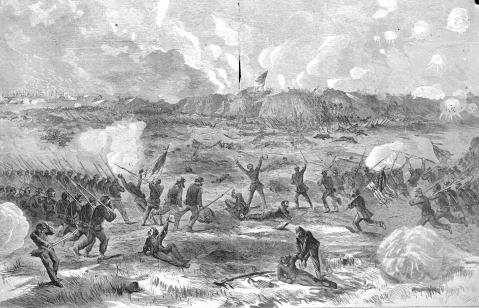 A depiction of the capture of Fort Fisher

On January 15, 1865, Fort Fisher, nicknamed “Gibraltar of the South,” fell to Union troops.

Built on a peninsula known as Federal Point at the mouth of the Cape Fear River, 18 miles south of Wilmington, Fort Fisher was the largest earthen fortification in the Confederacy. It guarded the port of Wilmington, and, in that capacity, was the most powerful seacoast fort in the South.

Fort Fisher was the last remaining lifeline in the closing months of the Civil War, allowing blockade runners to take advantage of the Cape Fear River to route supplies to troops inland.

On December 23 and 24, 1864, the Union Navy bombarded the fort. At the same time, the fort’s forces were reinforced with about 600 more men from Wilmington, increasing the number to around 2,000. The Union Navy attacked again on January 13, 1865. After two days, Union forces led by Gen. Alfred Terry overwhelmed the Confederate defenders led by Maj. Gen. W.H.C. Whiting and Col. William Lamb, and captured Fort Fisher.

The fall of Fort Fisher robbed Robert E. Lee’s army of its last connection to the outside and served as the beginning of the Wilmington Campaign, which also resulted in the fall of Fort Anderson and the occupation of Wilmington.

The Union attack on the fort was the largest amphibious attack by American forces until World War II.