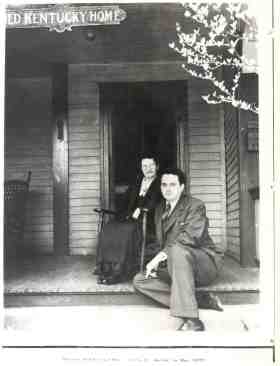 Thomas Wolfe and his mother Julia pose on the front part of the “Old Kentucky Home.” Image from N.C. Historic Sites.

On January 16, 1975, the state of North Carolina obtained Thomas Wolfe’s “Old Kentucky Home” from the city of Asheville. The boardinghouse at 48 Spruce Street was the setting for Wolfe’s first novel, Look Homeward, Angel. He renamed it “Dixieland” and incorporated his own experiences among the boarders into the novel.

The property dates at least to 1883 when Asheville banker Erwin Sluder built a smaller residence on the site. Between 1885 and 1889, Alice Johnston Reynolds, who had purchased the property from Sluder, made a massive addition to Sluder’s original structure and began operating the building as a boardinghouse in 1890. A subsequent owner, Rev. Thomas M. Myers, named it the “Old Kentucky Home” in honor of his home state.

Julia E. Wolfe, Thomas’s mother, bought the house for $6,500 in August 1906 and used it as a source of income to reinvest in real estate. Her husband, W. O. Wolfe, disliked boardinghouses and, although he went for meals and visits, rarely stayed the night. The Wolfes maintained two residences, with all the children except Tom living with their father. As the youngest child, Tom stayed with his mother at the boardinghouse.

Visit: The building is now the Thomas Wolfe Memorial, open to the public as one of 27 state historic sites.

For more about North Carolina’s history, arts and culture, visit the N.C. Department of Cultural Resources online. To receive these updates automatically each day, make sure you subscribe by email using the box on the right and follow us on Facebook and Twitter.