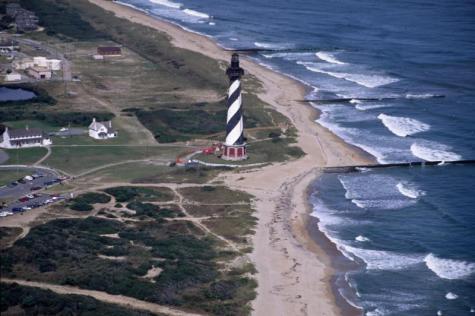 The Cape Hatteras Lighthouse in 1991. Image courtesy
of the National Park Service.

On January 23, 1950, after a 14-year hiatus, the Cape Hatteras Lighthouse once again shone its beacon over the Atlantic Ocean to warn mariners of the dangers of Diamond Shoals. The 208-foot tower had been abandoned because of the encroaching sea, and its signal was temporarily replaced by a light atop a steel structure, known as the skeleton tower, built near the lighthouse site.

At the time of its construction in 1870, the iconic black and white-striped lighthouse was 1,500 feet from the ocean. The lighthouse was constantly at risk from the quickly receding shoreline, but several measures were taken to keep it safe.

During the 1930s, a Civilian Conservation Corps crew constructed sand dunes and planted grasses that helped to build up the shoreline in the area. The construction of groins, the placement of sand bags and the installation of artificial seaweed offshore were also tried at the time, but by 1936 waves had reached the structure’s base, forcing the Lighthouse Service to close it.

After being saved in 1950, the lighthouse was threatened once again by the Atlantic during the 1980s, when waters came within 200 feet of its red brick base. Because of its historical and cultural significance, several options for preserving the structure were discussed by scholars, public officials and lighthouse lovers. After much debate, the 2,800-ton lighthouse was moved 2,900 feet from the shore in 1999.