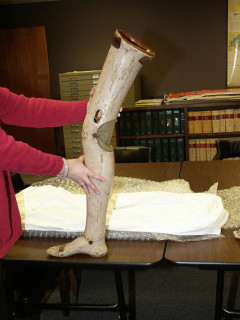 1866 Jewett leg that was issued to Samuel Clark of Granville County.

On January 23, 1866, the General Assembly passed a resolution asking Governor Jonathan Worth to contract with a manufacturer of artificial limbs to fulfill the needs of the state’s Confederate amputees. North Carolina thus became the first of the former Confederate states to offer artificial limbs to amputees.  The state contracted with Jewett’s Patent Leg Company, and a temporary factory was set up in Raleigh.  A system was developed whereby the amputees encountered no out-of-pocket expenses in visiting Raleigh for prosthetic fittings.

During the five years that the state operated the artificial limbs program, 1,550 Confederate veterans contacted the state for help.  According to records in the State Archives, the total cost of the artificial-limbs program to the state was over eighty-one thousand dollars.  After defeat, the loss of thousands of lives, and economic ruin, the state’s citizens still had the ability to achieve something noble by repaying, to a degree, those who had literally risked life and limb.

There are is a Jewett leg on display in the visitor’s center at Bentonville Battlefield in Four Oaks.