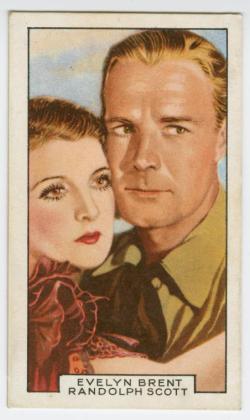 Scott with Evelyn Brent in a promotional card for the 1935 film Home on the Range. Image from the New York Public Library.

Raised in Charlotte, Scott excelled in sports, especially baseball, football and swimming.  After serving in World War I as an artillery observer with the Army, he enrolled at the Georgia Institute of Technology where played football until an injury caused him to withdraw. He returned to his home state to attend UNC but did not graduate.

Scott worked briefly in the textile firm where his father was employed but by 1927 had become interested in acting and moved to Los Angeles. Tall, lanky and handsome, he worked steadily, primarily, but not entirely, in westerns.

Though it took him nearly 10 years to work his way into A-level movies, he remained a popular star until he retired in 1962. His very name evokes the western film genre.

Scott married twice, briefly to heiress Marion du Pont, and then to Patricia Stillman, with whom he adopted two children. He often returned to North Carolina to visit family and, following his death in 1987, was buried in Elmwood Cemetery in Charlotte.