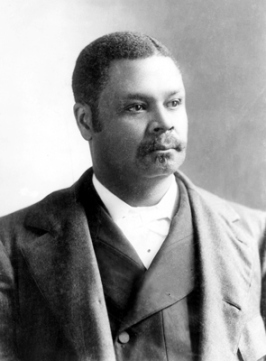 An image of George H. White from LearnNC

White was the fourth of four African Americans to represent North Carolina’s Second District in the United States Congress in the late nineteenth century. He obtained a law license in 1879 and served in the North Carolina House of Representatives and the Senate before being elected to the first of two four-year terms as district solicitor for the Second Judicial District.

White moved to Tarboro to run for office in what was known as the “Black Second” Congressional District. Elected in 1896 and 1898, he was the only black representative in Congress at the time. He was attentive to local issues and appointed many blacks in his district to federal positions. After the passage of legislation disfranchising black voters, White declined nomination to a third term, saying “I can no longer live in North Carolina and be treated as a man.” In his farewell speech he stated that “Phoenix-like he (the negro) will rise up some day and come again (to Congress).”

White was the last black member of Congress for twenty-eight years, and the last black Southerner in the body until 1973. North Carolina did not see another African-American in congress until Eva Clayton and Mel Watt took their seats in 1992 and 1993, respectively.